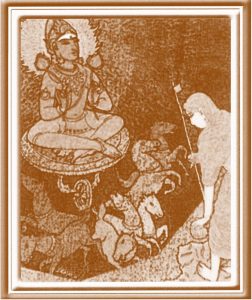 During the reign of Acharya Swamigal, very tumultuous times were faced by our devotees across the Land of Bharata. Turushkas and Mlecchas began entering the country with their large uncultured tribes through the North West frontier.  They were taking over huge parts of the Northern India so much so that their language was heard everywhere. Our Acharya Swamigal with his Maha-Tapas of Srividhya ensured that the resistance to these forces continued through the Kshtratvam of our kings and protected Dharmic devotees to pursue their Anushtana without disturbance.

Acharya Swamigal was presented with the Padhuka of Adi Acharyal (under worship even today in Sri Matham) by Adi Achryal himself who appeared before him along with Padmapadacharya in Sookshma form. Acharya swamigal was also instructed by an Asareeri to install the 38th Jagadguru Sri Abhinava Shankarendra Saraswathi Swamigal, who rose to fame even outside Bharata as a renincarnation of Bhagavatpada himself. So much so that historians mistake him for Adi Acharyal.

Then, I am glad that when the rule/power of Muslims grew all around, the odd language of mlecchas prevailed extensively, the precepts and practices of the righteous path adopted by the noble were protected by the efforts of Sri Vidyaghana.